Inspiration vs. Mimicking: The Art of Creation

Is imitation the sincerest form of flattery?

Sometimes it’s annoying to see someone post work showing off their skills when clearly they’re making a full-fledged effort to mimic somebody else, but the fact of the matter is we are all doing it.

That doesn’t mean we’re all consciously trying to be like someone else but every artist in the history of time tries to relate their art to the world around them, the only difference between good art and bad art is how successfully the artist hides it.

For instance, when I take a photo that is an original idea, say a model shooting herself in the head with Silly String.  A great idea and one I never, ever saw shot before.  An original idea?  At least I think it is… that being said I won’t be surprised when someone links me to a photo very similar to it (but I haven’t seen one). From 2010, by Photographer Jake Garn

The problem is not one single element in this image is a creation of mine.  Silly String was patented in 1972 – five years before I was born, the model is an exquisite creation of God, and the satire of suicide by string is ironic only because of the more serious issue it alludes to.

My only contribution was to combine a bunch of elements (that are not mine) and show them in a new way.  Technically I haven’t actually created anything.

Is that ok? Isn’t that all that art really is?  A reproduction of some form of the life we know?  Can we really claim ownership of that?

Well, the answer is a resounding YES!  We can copyright just about any artistic creation but where is the line between new and old?  When does a portrait of another person actually become the artists‘ creation?

Before I had a camera I drew, sketched and colored.  That was my artistic release, and when I would draw I’d look towards other images to mimic.  Just as a type of practice.  I made this drawing in high school based on a beautiful photo in National Geographic.  Not my creation but I did bring a new element to it, I changed the medium from a photo to a drawing… what are the ethics of that?  Am I allowed to change someone else’s photo into another medium? What about this drawing of Bob Marley I did during the boredom I endured at the outbound telemarketing job I had in High School?  Who’s art is it?  Is it the photographer that took the original image?  Is it the drawer?  Is it Bob Marley’s parents for giving birth to him?  The question can get a little blurry… but the fact is I didn’t have permission from the photographer to make a work based on their photo, but does that mean I can’t draw it?  Not at all! 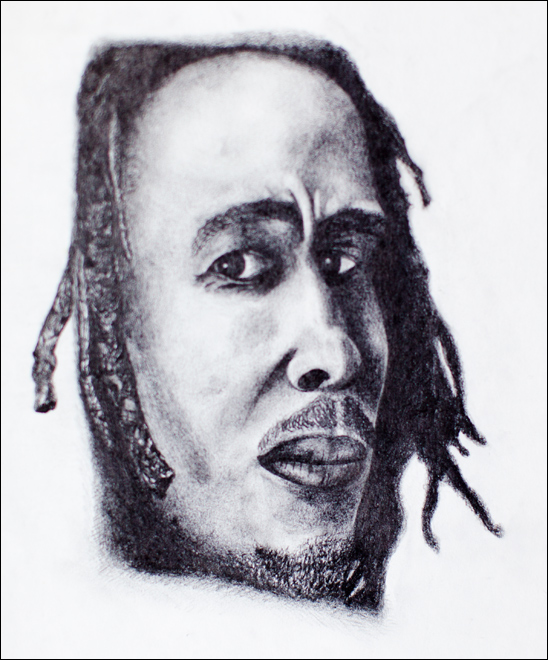 That said the ethics in the art world are pretty well established.  Drawings (and photos) that mimic somebody else’s creation are great for showing off and practicing technique, but you should never put mimicked images/photos/drawings in a professional portfolio (online or printed) and claim sole credit for the creation.  That’s just not cool.  But a personal site or a critique website where you go to learn?  I think most people agree that’s fair game.

If you want to claim credit for work then make sure it’s not just a copy of someone else’s hard work and inspiration.  Take something from the world around you and make it your OWN!  If you really want a drawing to be yours you need to draw something that nobody else created without your help or input!  Or if it is based on something at least bring something original to the table!  It’s a lot harder to draw from real life but it’s a lot more rewarding… take this charcoal drawing I did nearly 10 years ago (not the greatest thing in the world but not half bad for a hobbyist). My advice to you is to know the phase your work is in… if you are in the mimicking phase then don’t worry!  Everybody starts somewhere, but just realize that maybe you aren’t quite ready to slap that “XXXXX photography” logo on your images just yet.  Save that for when you start producing your own ideas, it’s much more rewarding that way! What can I do with an NFT? There is more to an NFT than just buying and selling. Whether an NFT is part of a crypto=game or an art collection NFTs can be used to create an experience. An NFT can also be burned, and in certain cases where the NFT was backed with crypto...

What is an NFT and what does it mean for artists?

What are NFTs?Twenty-five years after the World Wide Web was invented we have a technology that allows us to own digital assets that we've grown accustomed to consuming. You don't know it yet but this changes everything! I still remember in the late nineties when I...